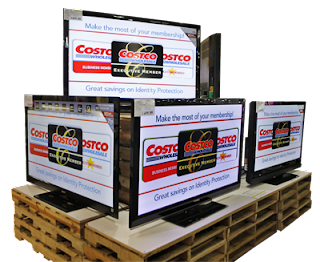 The number of television households continues to decline for Ohio's largest television markets, according to the latest Nielsen Market Universe Estimates for the 2011-2012 survey period.

Ohio's largest television market, Cleveland/Akron/Canton, will lose 12,030 households from 2011 and 2012. However, the market will hold its rank as the 18th largest U.S. into next year.

The only positive increases in the state were in Columbus and Youngstown. Columbus will move up from 34th to 32nd largest U.S. market with an increase of 16,730 TV households. Meanwhile, Youngstown adds one market size from 111th to 110th, but will still lose 4,300 households.

It was bad news for all other rated markets in Ohio including in Cincinnati which falls from 33rd to 35th largest TV market in the country with a loss of 27,740 TV households.

Across the country, the United State is expected to lose 1,256,140 television households between 2011 and 2012 as some consumers ditch their televisions for mobile and internet, among other reasons.

Source: Nielsen
Posted by Frank Macek at 6:13 PM 2 comments: Links to this post

Behind the Scenes: Making Promo Magic at WKYC

Here is a behind the scenes look at Robin & Chris as videographer Barry Wolf works his magic on a tease for the Browns Halftime newscast this evening during the Browns vs. Eagles game on Channel 3:

Email ThisBlogThis!Share to TwitterShare to FacebookShare to Pinterest
Labels: behind the scenes

The kids are heading back to school and Channel 3 Sports is all fired up for a brand new season of the area's best coverage of local high school football with "Friday Night Fever." 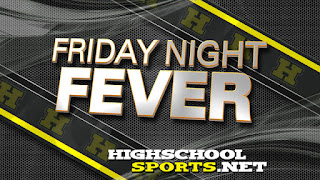 Our coverage will kick off this Friday, August 27th, with "Hey, Chuck!" at 6 p.m. with Chuck Galeti. At 11 PM, super Dave Chudowsky will have all the highlights and scores from the area's hottest games in the fastest paced 8 minutes on TV.

The site features weekly previews, up to the minute scores, feature articles and gives you a chance to upload your own video of the games for all your friends to see.

The only address you need is: cleveland.highschoolsports.net
Posted by Frank Macek at 6:24 PM No comments: Links to this post

Browns vs. Lions Beats All Sports And Prime Competition on Channel 3

The second Browns preseason telecast of the season was a big hit with sports fans all over Northeast Ohio. With an 18.3 Household rating and a 33 share, an average of 352,400 Adults 18+ watched the game on WKYC.

It dominated viewing Friday night and was easily the most watched program of the week. The game did a 46.7 share in M25-54, smashing the Fox NFL preseason game on WJW. The Browns averaged a M25-54 rating of 17.3 while the Jaguars and Falcons pulled a .4 rating.

Football traditionally achieves strong male demographics, but the Browns have always had huge support among their female fans. The Adult 25-54 rating was a powerful 12.2, beating every single primetime show combined.

“No one has to tell us that Browns fans are passionate and loyal,” said Brooke Spectorsky, President and General Manager of WKYC. “We see it in the ratings of those who watch at home; we see it in the faces of those cheering in the stadium.”

The HD production of Browns preseason includes a crew of over 30 technicians and production personnel, 10 cameras, 8 channels of video replay, live aerial coverage from the Goodyear blimp and unique access to players and coaches. WKYC began preseason coverage of Browns football upon the team’s return to Cleveland in 1999.

The next preseason game will be live from Philadelphia this Thursday at 7:30pm and seen on WKYC/Cleveland, WHIO/Dayton, WBNS Columbus and WYTV/Youngstown.
Posted by Frank Macek at 5:56 PM No comments: Links to this post

Quarterback Colt McCoy wasn’t the only one posting great numbers as the Browns preseason game on WKYC did an impressive 19.1 Household Rating/35 share and a 19.4 rating/53.5 share in Men 25-54.

“We’re happy football is back. And like fans all over Northeast Ohio, we really enjoyed watching the Cleveland Browns beat the Green Bay Packers,” said Brooke Spectorsky, President and General Manager of WKYC. “The preseason games on Channel 3 have always garnered excellent ratings, but this year looks to be pretty exciting for everyone.”

NBC’s Andrew Catalon, filling in for WKYC Sports Anchor Jim Donovan, was impressed with the team’s debut. “What a great way to start a season, especially after only two weeks of training camp,” said Catalon. “Bernie Kosar and I are really looking forward to calling Friday’s game against the Detroit Lions.”

Friday's Pregame Huddle begins our coverage followed by the first kick at Cleveland Browns Stadium at 7:30 p.m.
Posted by Frank Macek at 3:22 PM No comments: Links to this post 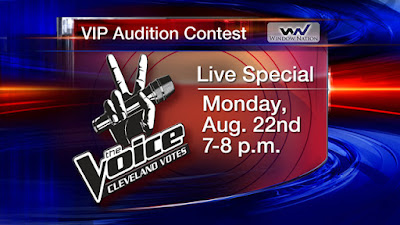 In preparation for the upcoming season of "The Voice" on NBC, WKYC is helping to make the dreams our aspring local singers come true with a live VIP audition contest to be held on Monday, August 22nd, from 7-8 p.m. on Channel 3.

For the last several weeks, we have been accepting auditions from anyone who is looking to find fame and fortunes through their voices.

This Saturday, we are calling back our entrants to face a live panel of judges including Barry Gabel, Avant, Evelyn Wright and Jim Henke from the Rock Hall to perform at the Channel 3 Studios.

Then on Monday, our top 10 finalists will compete on Channel 3 between 7 & 8 p.m. to showcase their talents LIVE to all of Cleveland. WKYC anchors Robin Swoboda and Chris Tye will host the show.

At 8 p.m., we'll open up voting and you'll help select the 3 best performances to advance to the national Los Angeles auditions where they will go to the front of the line to meet with the casting directors of the hit NBC show.

Join us this Monday, from 7 to 8 p.m. for our live special "The Voice: Cleveland Votes" only on Channel 3.

Click on the video to watch our on-air promo:

Posted by Frank Macek at 9:13 PM No comments: Links to this post

Radiohead returns for their second appearance as musical guest. Universally considered one of the most innovative and influential bands in existence, Radiohead's music has consistently topped charts and left audiences breathless. The three-time Grammy Award winning band recently released their newest album, "The King Of Limbs."

Melissa McCarthy will make her debut appearance as host on October 1. McCarthy currently stars in the CBS sitcom "Mike & Molly," for which she recently earned her first Emmy Award nomination. She also appeared in this summer's box office blockbuster "Bridesmaids" alongside "SNL's" Kristen Wiig.

Making their SNL debut, Lady Antebellum’s third album, "Own The Night" is scheduled for release September 13, and is already garnering attention with their chart-topping single, "Just a Kiss." The six-time Grammy Award winning trio's past albums have reached double and triple platinum status and spawned several number one hits, including "Need You Now."

--
Source: NBC
Posted by Frank Macek at 5:59 PM No comments: Links to this post

WKYC’s Sports Anchor Jim Donovan is responding remarkably well to a bone marrow transplant he received two months ago in his battle against leukemia. “The doctors are very pleased with my progress,” stated Jim, “but unfortunately I’m not quite ready to return to full-time work and travel.”

“As much as we’d love to have Jimmy kick off the Browns season, it’s much more important that he regain his full strength,’ said Brooke Spectorsky, President and General Manager of Channel 3. “Jim is one of the best in the business and we are fortunate to have him as part of the Browns family,” added Mike Holmgren, President of the Cleveland Browns. “We look forward to his return to the broadcast booth.”

Andrew Catalon was part of NBC’s Olympic coverage from Vancouver and Beijing. He’s done preseason work for WNBC and the New York Giants, and called the play by play for both the 2010 US Open Tennis Tournament and 2011 Masters for CBS Sports. Currently he fills in on the NBC Sports Desk, anchoring weekend updates and is also the weekend sports anchor at WNYT-TV in Albany.

“I’m really looking forward to working with Bernie Kosar and the rest of the Channel 3 crew as the Browns begin what looks to be a terrific year,” said Catalon. “I know football fans everywhere admire and respect Jim Donovan’s work and I hope he’s back in the booth as soon as possible.”
Posted by Frank Macek at 6:19 PM No comments: Links to this post