WKYC Looking For Our Next Morning Traffic Reporter Star 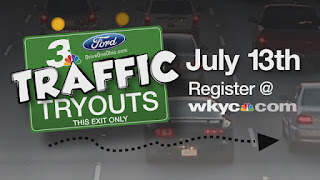 Do you know Northeast Ohio's roads like the back of your hand? Can you work around a traffic jam in a jiffy?

Then you could be Channel 3's next morning Traffic Reporter!

We're searching for a fresh face to join the team, so if you've the got roadway knowledge and a great morning attitude, join Pat Butler and the WKYC crew for TRAFFIC TRYOUTS on Saturday, July 13.

Auditions will be held at the Channel 3 Studios, 1333 Lakeside Avenue, Cleveland.

For your chance to tryout or more information, please go to: http://on.wkyc.com/traffictryout

Disclaimer: 1 reservation per email address, please. You must be 18 years of age. These are tryouts only and do not guarantee full or part-time employment.
Posted by Frank Macek at 8:23 PM

McLEAN, VA and DALLAS, TX – JUNE 13, 2013 – Gannett Co., Inc. (NYSE: GCI) and Belo Corp. (NYSE: BLC) jointly announced today that they have entered into a definitive merger agreement under which Gannett will acquire all outstanding shares of Belo for $13.75 per share in cash, or approximately $1.5 billion, plus the assumption of $715 million in existing debt for an enterprise value of approximately $2.2 billion. The transaction, which has been unanimously approved by the boards of directors of both companies, represents a 28.1 percent premium to the closing price of Belo common stock on June 12, 2013.

The combination creates a broadcast “Super Group,” catapulting Gannett into the nation’s fourth-largest owner of major network affiliates reaching nearly a third of all U.S. households.  The acquisition nearly doubles Gannett’s current broadcast portfolio from 23 to 43 stations, including stations to be serviced by Gannett through shared services or similar sharing arrangements. Upon completion of the transaction, Gannett’s Broadcast segment will have greater geographic and revenue diversity, with 21 stations in the top 25 markets and will become the #1 CBS affiliate group, the #4 ABC affiliate group, and will expand its already #1 NBC affiliate group position. Following the transaction, Gannett’s Broadcast segment is expected to contribute more than half of the Company’s pro forma total EBITDA, and the Digital and Broadcast segments combined are expected to contribute nearly two-thirds.

Gracia Martore, President and Chief Executive Officer of Gannett, said, “We are thrilled to bring together two highly respected media companies with rich histories of award-winning journalism, operational excellence and strong brand leadership.  We have been successfully transforming Gannett into a diversified multi-media company with broadcast, digital and publishing components across high-growth markets nationwide, and this is another important step in the process.  It will significantly improve our cash flow and financial strength, enabling us to quickly pay down debt while remaining committed to disciplined capital allocation.  By enhancing our portfolio with one of the largest, most geographically diverse and network-balanced TV station groups in the country, the new Gannett will be well positioned to lead innovation, bolster our existing growth initiatives and take advantage of new opportunities in the emerging digital media landscape.”

Commenting on the transaction, Dunia A. Shive, Belo’s President and Chief Executive Officer, said, “This is an outstanding and financially compelling transaction for our shareholders.  It is also a testament to the tremendous value our employees have created over Belo’s long history and to the strength of our brand in the media industry.  I am confident that we have found an excellent partner in Gannett – they are a leading media company that shares our commitment to the highest levels of journalistic integrity and embraces an active approach to community involvement.  Together, this portfolio of media assets will be well-positioned to capitalize on substantial growth opportunities in the years ahead.”

The transaction is expected to close by the end of 2013, subject to antitrust approval, Federal Communications Commission (FCC) approval, approval by holders of two-thirds of the voting power of Belo shares, and customary closing conditions.  Belo’s directors and executive officers, who collectively own approximately 42 percent of the voting power of Belo’s outstanding shares, have entered into voting and support agreements to vote their shares in favor of the transaction with Gannett.  Gannett expects to finance the purchase through cash on hand, accessing the capital markets and bank financing.

Gannett will continue its share buyback program and has replaced its existing remaining authorization with a new $300 million authorization expected to be used over the next two years.  The Company will also continue its existing dividend payment program.  Given Gannett’s balance sheet strength and increased cash flows from Belo’s broadcast stations, the Company expects to promptly pay down the debt associated with this transaction and maintain significant financial flexibility going forward.

Belo Stations being acquired by Gannett include: 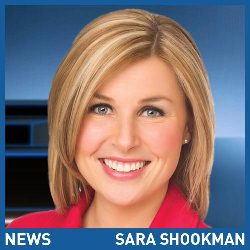 Congratulations to Channel 3 Reporter Sara Shookman on her first place award in the Press Club of Cleveland's "2013 Ohio Excellence in Journalism Awards." Sara won for her report called "Superstorm Sandy: From the edge of the storm." Sara also received a 2nd place honor for her human interest story "Hometown Tour with Dee Haslam."

Channel 3 News welcomes Grant deBruin as our new weeknight 11pm producer. deBruin comes to WKYC from our sister station in Buffalo, WGRZ-TV, where he’s currently producing the 5am newscast.  WGRZ has grown to the #1 station in that market with a strategy of asking tough questions and being unwavering advocates for viewers and the community. Grant will bring that winning approach to our news coverage. 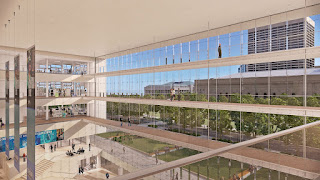 Channel 3 will holding a station sponsored Health & Wellness Expo at the new Global Center for Health Innovation/Convention Center on Saturday, September 7th from 10 am to 6 p.m. The expo will be FREE and open to the public as only the second major event of the new facility. WKYC’s mission in bringing this expo to Cleveland is to improve the health and wellness of our viewers and to give them hands on interactive ways to get health information and have fun. The staff of the entire station will be involved on September 7th, greeting viewers, signing autographs, working with sponsor clients, etc. There will be free health screenings like blood pressure, cholesterol, glucose. There will be a Health Forum Pavilion with Monica Robins moderating discussions on trending medical topics, area chefs cooking up health food, plus fun interactive exhibits like a climbing rock wall, golf area and soccer field. Watch Channel 3 News for more details on air and on wkyc.com as we get closer to September.

WKYC will air "Operation Inspiration" on June 29th at 7 p.m. Eckrich, the underwriter of the special, is donating 5 cents for every purchase of specially marked products from May 1 through July 4, 2013, up to $250,000, as a way to provide assistance to inspiring military families. The special will be hosted by NBC's Al Roker and feature NASCAR's legendary "The King" Richard Petty, #43 driver Aric Almirola and other celebrities.

Finally, WKYC will air the only Browns game in prime time this year on Thursday, October 3rd, as they take on the Buffalo Bills at FirstEnergy Stadium in downtown Cleveland. Coverage will begin at 8 p.m., followed by first kick at 8:25 p.m.

Congratulations to several WKYC journalists on earning Emmy awards from the Lower Great Lakes Chapter of the National Academy of Television Arts and Sciences (NATAS).

This year's 44th annual awards were presented Saturday, June 1st, at Windows on the River in Cleveland with a reception held afterward at the Greater Cleveland Aquarium.

The Lower Great Lakes Chapter has a mission to serve its members, recognize excellence and promote the highest standards in television professionalism for stations and broadcast entities Ohio, Indiana and Pennsylvania.

The following awards were won by WKYC on Saturday:

For a complete list of all this year's nominees, click the following link @ http://bit.ly/11mSGzE
Posted by Frank Macek at 4:00 PM