NBC News will celebrate the 50th anniversary of veteran anchor and special correspondent Tom Brokaw with “Tom Brokaw at NBC News: The First 50 Years,” a prime time special on Sunday, January 29 at 9 p.m.

The two-hour special features his most memorable highlights and famous interviews from the start of his career reporting on Ronald Reagan’s first run for office to his most recent coverage of the 2016 presidential election, as well as never-before-seen moments from Brokaw’s tenure at NBC News and new conversations with special guests. 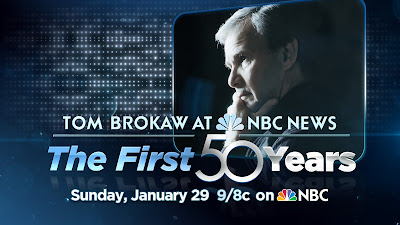 Brokaw and his guests will share insights and discuss topics from the last half century including race relations, politics, the women’s movement, technology, and global affairs.

“For 50 years I’ve been covering stories around the world for NBC News and this is a unique opportunity to share those experiences with friends and our audience,” said Brokaw. “It’s a little overwhelming to realize how far I’ve gone and what I’ve seen.”

Brokaw, celebrated as the chronicler of “The Greatest Generation,” began his career with NBC News in 1966 in the Los Angeles bureau, where he covered Ronald Reagan’s first run for public office, the rise of the Sixties counter culture, the assassination of Bobby Kennedy and the 1968 presidential campaign.

In 1973, he moved to Washington as the NBC News White House correspondent, a position he held until 1976 when he started co-hosting TODAY. In 1983, he became the anchor and managing editor of "NBC Nightly News with Tom Brokaw.”

Brokaw was the first to conduct an interview with Mikhail Gorbachev, the first to provide a network report on human rights abuses in Tibet accompanied by an exclusive interview with the Dalai Lama and the only American network anchor to report from Berlin the night the Berlin wall came down.

Brokaw's first book, "The Greatest Generation," is one of the most popular nonfiction books of the 20th century. In November 2014, he was awarded the Medal of Freedom by President Barack Obama, the nation's highest civilian honor. He contributed to NBC News’ coverage of the 2016 Election and served as a special correspondent for the presidential inauguration last Friday.
Posted by Frank Macek at 8:16 PM No comments: Links to this post

BOLD (Broadcast Online Live Daily) will be produced unique to each time zone. Each live 30-minute episode will be distinct and able to capture the stories people are talking about at that exact moment. BOLD will connect with viewers in a dynamic and immersive 360 degree viewing experience, enabling viewers to interact live with the show’s hosts, share their reaction and opinions on stories, vote on BOLD content and polls and submit videos and stories that could appear on the show.

“Daytime TV has become predictable and similar. BOLD will be different. The show will reflect how viewers are consuming content across multiple platforms at the same time. BOLD combines those experiences in an informative, interactive and innovative way. BOLD will do the heavy lifting, bringing together the day’s top stories, funny and emotional content and viral videos in one place,” said Dave Lougee, president, TEGNA Media. “We are thrilled to be working with MGM. Their exceptional track record speaks for itself and we believe, together, we can help BOLD break the mold of daytime TV.”

“TEGNA has a significant footprint across the U.S. with a group of very successful television stations. Since this is a live program created by stations for stations, it will speak to our client base. We’re excited to partner with TEGNA and tap into their creative approach to integrating social media and broadcast television with these live feeds, said John Bryan, president, domestic television distribution, MGM.

BOLD understands daytime television viewers are consuming content on multiple screens at once. Over 200 million people in the U.S. consume media on multiple devices, outnumbering single screen audiences 2.5 to 1. Two-thirds of daytime TV viewers use social media, with many interacting, engaging and sharing content while also watching TV. BOLD will meet this evolving audience behavior, aggregate the top stories and trending content and add context, perspective and insight. BOLD will deliver what daytime viewers want most while watching a show: to laugh or smile, to relax and to find out what’s happening. Real-time analytics and continuous incoming data will guide BOLD’s process, presenting the most compelling videos and stories that are relevant to the audience.

*Research from Frank N. Magid Associates
Posted by Frank Macek at 6:32 PM No comments: Links to this post 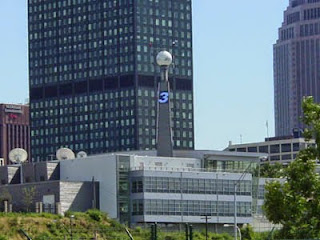 Hope you all had a great holiday season with family and friends. Hard to believe we are already into January 2017!

Your blogger is really looking forward to seeing what this year brings both for the city of Cleveland and our country. I think it would be really hard to top 2016 in terms of excitement, but we can hope it's a fun year in local television.

I have just a couple of notes for this month's edition of "News and Notes."

For those of you counting, this month marks our 16th year at the Channel 3 Studios at the corner of E. 13th and Lakeside Avenue, or has it is now called "Tom Beres Way" in honor of WKYC Senior Political Reporter Tom Beres who retired last month after 37 years with the station.

If you remember, WKYC debuted our new set on the Monday following the Superbowl in January 2001. Over the years, we've made a few tweaks and are hopeful to have a new set in the next couple of years as television continues to evolve into a multi-platform arena where on-air and on-line are merging into a digital first approach.

In the news, congratulations to WKYC Assistant News Director Jonathan Adkins (pictured right) who was recently recognized by our parent company, TEGNA Media, with an "Own It" award. Jon was recognized for all his amazing efforts in planning and executing the station's highly successful coverage of the 2016 Republican National Convention that happened here in Cleveland last July. From getting us the best broadcast location at the Q to getting everyone credentialed and fed in the field during the RNC, Jon was at the heart of it all. Then the following week, Jon found himself on a plane to Philadelphia with anchor Russ Mitchell and Multi-Media Journalist Brandon Simmons for our on-site coverage of the Democratic National Convention. Prior to becoming Assistant New Director, Jon was the executive producer for Channel 3 News at 6 p.m.
Longtime WKYC Art Director Jim Kegelmyer (pictured above, right of center) hung up his virtual paintbrush last month and retired after 42 years with the station. "Keg," as we affectionately call him, began his career at Channel 3 in 1974 when the station was still an NBC owned and operated station and branded as "Action 3 News." Hopefully, you recognize some of the news team pictured including anchor Dough Adair. Best wishes to Keg for the future, though we are pretty sure he won't be bored in retirement as his wife plans to keep him busy around the house.

On a sad note, we said goodbye to Herman Kirksey, who passed away on Saturday, December 17th. "Mickey" was one of our cherished members of the family as a security guard and good friend to many for years around here at WKYC before retiring last summer due to health issues. For many fall seasons, Mickey also served as our Friday Night Fever referee giving the sports team a whistle blow and a "2 minute warning" during the high school football season. We'll miss seeing Mickey roaming the halls at WKYC keeping us safe from harm, but we are sure he is still watching over us from above.

Congratulations to the following people who have joined the Channel 3 team:

Before we go, we'd also like to recognize these employees who have recently retired or plan on retiring from the station:
--- 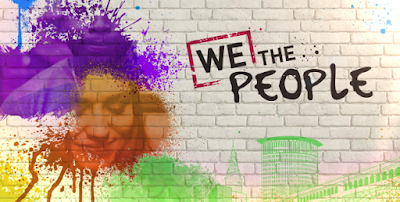 WKYC is kicking off the new year with a brand new show called "We The People" that debuts this Friday, January 6th at Noon.

"We The People" is different than other community affairs type shows explains Executive Producer Margaret Bernstein. "We’ll be interviewing the 'do-ers,' people doing interesting things in our community, and we’ll explain to viewers how to get involved and take part in the projects we spotlight."

Channel 3 News Today personality Tiffany Tarplay will host the show that will include a community calendar to let viewers know about events going on in Northeast Ohio and we’ll also have a “Volunteer Opportunity of the Week” to encourage people to get out and get involved.

This week, the show will feature the new literacy initiative, Slavic Village Reads, that WKYC is kicking off this week with Third Federal.

You can stay connected with the "We The People" page on Facebook to share your thoughts on the program and offer ideas for the show at: https://www.facebook.com/WeThePeopleWKYC

Posted by Frank Macek at 7:28 PM No comments: Links to this post

Email ThisBlogThis!Share to TwitterShare to FacebookShare to Pinterest
Labels: Margaret Bernstein, We The People, wkyc

WKYC News Director Brennan Donnellan tells the Director's Cut Blog that Danielle will lead the station's Verify segments where "we look for transparency in how we follow a story and fact-checking, especially important in this era of fake news and social media."

Serino is an Emmy Award Winning Anchor and Investigative Reporter who has worked in major news markets including Miami, Chicago and New York, where she was filling-in as an Anchor for Early Today on NBC.

Most recently she worked at WOIO in Cleveland as the afternoon Anchor and Investigative Consumer Reporter.

Danielle began her Television career as a Field Producer for a show called "Real Stories of the Highway Patrol" where she followed the Vice Squad in Newark, New Jersey answering 911 calls. After that, she went a more traditional route and began writing for a 24 hour news outlet called News 12 in New York, eventually finessing her way to an on air reporting job.

Her next stop was WAMI in Miami where she began her work as an Investigative Reporter, covering social issues for a news program called The Times. It was there that she won an Emmy for a series on the 25th Anniversary of the Mariel Boat Lift.

Danielle then became a Midwesterner, heading to FOX Chicago where she led her own Investigative Consumer segment which was nominated for multiple Emmy Awards. She reported on everything from unscrupulous businesses which she put into “Danielle’s Doghouse” and tested infomercial products for a segment called "Does It Work Danielle?”.

She made the decision to “bring her talents” to Cleveland where she continued her Investigative Consumer Reporting, as well as anchoring the 4:30 and 5:30pm newscasts for 19 Action News. She also regularly filled in on WTAM for the “Spew” where she battled Mike Trivisonno over current events.

During her time here she has been actively involved in several non-profits including Frontline Service which reaches out to adults and children in Northeast Ohio to end homelessness, prevent suicide, resolve behavioral health crises, and overcome trauma. She also works with Dancing Classrooms Northeast Ohio a program which builds social awareness, confidence and self-esteem in young students through Ballroom dancing.

Danielle is not all work and no play though. She’s an adventure seeker who has traveled the world, backpacking through the Middle East, rappelling waterfalls in St. Lucia, parachuting and bungee jumping. She is also an avid Salsa Dancer.

Posted by Frank Macek at 10:02 PM No comments: Links to this post