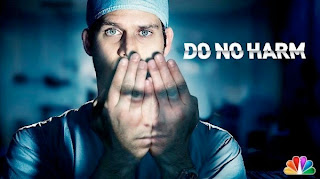 NBC will premiere the new drama "Do No Harm" on Thursday, January 31, from 10-11 p.m. following the hour-long series finale of the Emmy Award-winning "30 Rock" at 8 p.m. earlier that same night.

In addition, "Rock Center with Brian Williams" will move to Fridays beginning February 8 from 10-11 p.m. right after "Dateline NBC" which also makes a move to an earlier 9 p.m. slot.

The announcements were made Friday by Robert Greenblatt, Chairman, NBC Entertainment.

"January 31 will be a special night as one classic series will mark its finale with a great hour-long sendoff episode while a promising new drama will make its debut on Thursdays," said Greenblatt. "'30 Rock'" is acclaimed as a legendary comedy and we will see a truly memorable and fitting last episode. In "Do No Harm," viewers will have a unique new dramatic storyline with an exciting new star in Steven Pasquale that takes them into dark and uncharted territory."

Details of the finale of "30 Rock" will be provided later.

"Grimm" will return to the schedule on Friday, March 8, at 9 pm. In "Do No Harm," Dr. Jason Cole (Steven Pasquale, "Rescue Me") is a highly respected neurosurgeon who has it all - a lucrative career, confident charm, the gift of compassion. But he also has a deep, dark secret.

One morning when he wakes up disoriented in a wrecked hotel room amidst several near-naked women he's never seen before, he knows one thing: it's happening again. Every night at the same hour, something inside Jason changes, leaving him almost unrecognizable, seductive, devious, borderline sociopathic.
Posted by Frank Macek at 8:32 PM No comments:

Email ThisBlogThis!Share to TwitterShare to FacebookShare to Pinterest
Labels: dateline nbc, do no harm, nbc, rock center with brian williams

Posted by Frank Macek at 9:55 PM No comments:

Email ThisBlogThis!Share to TwitterShare to FacebookShare to Pinterest
Labels: notes from the newsroom for 11/9/12 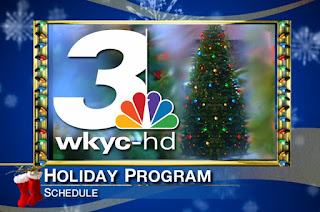 "The Macy's Thanksgiving Day Parade" will step off on Thursday, November 22 (9 a.m-12 noon all time zones).

Following the parade will be popular holiday special "The National Dog Show Presented by Purina" -- hosted by actor, author and Broadway star John O'Hurley ("Seinfeld," "Dancing with the Stars") and expert analyst David Frei -- on Thanksgiving Day from 12 noon to 2 p.m. in all time zones.

In addition, the network will once again honor the United States armed forces as World Wrestling Entertainment, in conjunction with NBC, will air the fourth annual "WWE Tribute to the Troops" (Saturday, December 22, 9-10 p.m. ET).

NBC also includes "SNL Christmas" on Wednesday, November 28 (9-11 p.m. ET), a compilation of fan-favorite holiday sketches from "Saturday Night Live." The popular Buble returns a second time to NBC as to host his own Christmas music special in "Michael Buble: Home for the Holidays" while Shelton (NBC's "The Voice") will host his first holiday-themed special in "Blake Shelton's Not-So-Family Christmas." 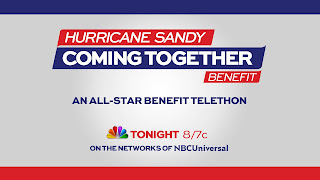 NBC is doing a benefit concert for victims of Hurricane Sandy featuring some artists native to the areas hardest hit.

Bruce Springsteen and Jon Bon Jovi of New Jersey and Billy Joel of Long Island are scheduled to appear at the concert Friday.

The telecast will benefit the American Red Cross and will be shown on NBC and its cable stations including Bravo, CNBC, USA, MSNBC and E!

Other networks are invited to join in.

The concert will be hosted by Matt Lauer. It will air at 8 p.m. Eastern and will be taped-delayed in the West. Other performers include Christina Aguilera, Sting and Jimmy Fallon.

The telethon will be broadcast from NBC facilities in Rockefeller Center in New York City.

Source: The Associated Press
Posted by Frank Macek at 5:15 PM No comments: