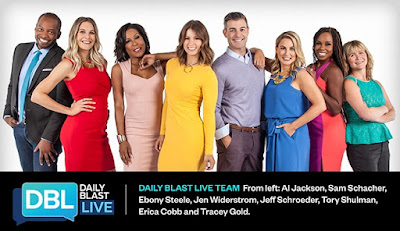 DBL will debut on Monday, September 11 across 36 TEGNA markets and can be seen LIVE nationally on Facebook and YouTube.

DBL’s host team will share their expertise, unpredictable opinions and distinctive points of view on the day’s news, daily trending topics and viral, shareable content generating buzz at that very moment. The hosts include:

“We purposely tapped personalities from a cross-section of backgrounds and disciplines to bring their distinctive voices, personalities and points of view to DBL. We’re confident that audiences across the country will want to engage with them, live, around the day’s news and trending topics.”

DBL’s 360-degree, multi-platform brand will bring the latest trending stories to viewers 24/7 with broadcast and digital teams delivering a fun, entertaining and exciting half hour to viewers. Seven LIVE, half-hour feeds will be produced per day (Monday through Friday) and be LIVE in nearly every market and time zone in which it airs. DBL will also be streamed LIVE Monday through Friday on the DBL Facebook page from 2-3 p.m. ET and 7-7:30 p.m. ET as well as on YouTube LIVE from 3-5 p.m. ET.

DBL’s first-of-its-kind, innovative format will enable viewers across the country to participate in the show’s conversation, LIVE, in real-time, by sharing their reactions and opinions on stories, voting on content and submitting videos and other content that may appear on the show.

Posted by Frank Macek at 4:38 PM No comments: