TEGNA Media, the broadcast division of TEGNA Inc. and parent owner of WKYC-TV, today was named Station Group of the Year by Broadcasting & Cable.

TEGNA Media was chosen because of its “outstanding group of local television stations whose leading reportage, ratings, financial results and strategic moves demonstrated its exceptional accomplishments in taking on dynamic market trends,” according to the publication.

“This is a great accomplishment and we thank Broadcasting & Cable for honoring the exceptional work and commitment that takes place every day across our company,” said Gracia Martore, president and CEO, TEGNA.

“This recognition is the culmination of a terrific year for TEGNA Media which received many well-deserved honors. It also symbolizes what this company is all about. We deliver quality content and innovation that makes a difference every day.”

TEGNA Media’s many highlights this year include:
“When we commit to excellence in journalism, to empowering our communities and to advancing our clients’ businesses, everybody wins,” said Dave Lougee, president, TEGNA Media. “We’re very proud of the meaningful work TEGNA Media employees perform every day.”
Posted by Frank Macek at 3:46 PM No comments: Links to this post

However, Schmucki joined the WKYC family in 1970 as a part-time news field audio person and covering the Kent State riots quickly became his first assignment in May of that year.

He was hired full time in 1974 and continued his work in the news department until 1978, when he transferred to the engineering department and remained until hanging up his soldering iron last Thursday.

WKYC Director of Technology and Operations Jim Miller fondly recalls, "Jack has been involved in so many things over the years, I can’t possibly name them all. He was the Engineer In-Charge of Browns pre-season games for 15 years and has spent the last 16 years as the Assistant Chief Engineer. Prior to that, he worked in the Tech Shop with a number of co-workers."

While Jack worked full time at WKYC for 41 years, he actually started here before he was born! Miller added, "That’s right… Jack’s mother worked at WKYC while she was pregnant with Jack."

We will greatly miss Jack’s skill set that enabled him to tackle any problem and his crazy sense of humor!

Best wishes from all of us past and present at WKYC-TV.

Posted by Frank Macek at 5:14 PM No comments: Links to this post

Byrnes was named a recipient of the YWCA Women of Achievement Awards for 2016 along with 7 other local leaders.


“It is a pleasure to honor and share the accomplishments of these eight influential leaders, especially for this monumental 40th Anniversary celebration of Women of Achievement,” says Margaret Mitchell, YWCA Greater Cleveland’s President and CEO. “These women are talented and exemplary in their careers, and they are dedicated to changing lives and communities in Greater Cleveland and beyond.”


This prestigious award, celebrating its 40th year, is presented to a select group of Northeast Ohio women who have achieved extraordinary accomplishments through career success, community service, leadership, mentoring, and dedication to YWCA’s mission of eliminating racism and empowering women.

This year's recipients include the following:

Channel 3 will re-air two of this holiday season's most popular shows. 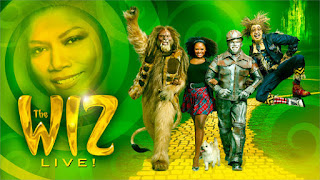 First, "The Wiz Live!" will air this Saturday night, December 19th, from 8 to 11 p.m. The show is NBC's latest musical holiday tradition: a 3-hour event production of the groundbreaking Broadway show that brought Oz to life in a funky sing-along journey down the yellow brick road that originally aired live on December 3rd.

Second, Dolly Parton's "Coat of Many Colors" will air again on Christmas night from 9 to 11 p.m. This movie is based on the inspiring true story of living legend Dolly Parton's remarkable upbringing.

This once-in-a-lifetime movie special takes place inside the tight-knit Parton family as they struggle to overcome devastating tragedy and discover the healing power of love, faith and a raggedy patchwork coat that helped make Parton who she is today. The film is set in the Tennessee Great Smoky Mountains in 1955. It is neither a biopic nor a musical about Dolly's whole life and performing career, but rather a family-oriented faith-based story about the incidents in her and her family's life around the time she was nine years old.

"Coat of Many Colors" first aired on Channel 3 December 10th.

Email ThisBlogThis!Share to TwitterShare to FacebookShare to Pinterest
Labels: coat of many colors, the wiz live, wkyc

TEGNA Inc., parent of WKYC-TV, today announced it has cleared “T.D. Jakes”, a multi-issue daily one-hour talk show hosted by T.D. Jakes, on 29 TEGNA Media stations to air in the fall of 2016.

In a move designed to create more original programming, TEGNA Media will both produce and distribute the “T.D. Jakes” series.

“T.D. Jakes has a unique and uplifting voice that is well suited for daytime television. With Jakes at the helm, this program has an opportunity to attract blue-chip advertisers, generate large audiences and empower viewers across the country,” said Dave Lougee, president, TEGNA Media.

“During the show’s test run this summer, Jakes’ audience grew each week in every market. Once viewers found him, they liked him and we look forward to introducing him to a wider audience next fall.”

Jakes is a prominent Dallas-based pastor, entrepreneur and businessman, whose multi-platform reach extends far beyond the pulpit of his 30,000-member church and humanitarian organization, The Potter’s House. His reach also includes nearly 5 million social media followers.

In addition, Jakes is a best-selling author of more than 40 books with his latest, Destiny, debuting in the top ten on The New York Times Bestseller List this past August. He has produced Grammy Award winning music and several feature films including “Heaven is for Real”, “Sparkle”, and “Jumping the Broom”. His next film, “Miracles from Heaven”, will be released on March 18, 2016.

“It is indeed an honor for TDJ Entertainment to work with such a stellar slate of industry players like TEGNA Media, 44 Blue, EnLight and Scott Carlin whose belief in my ability to engage a broader audience with relevant and uplifting content is consistent with my years of experience at the intersections of the faith-based, entertainment and business worlds,” said T.D. Jakes, CEO of TDJ Entertainment and Senior Pastor of The Potter’s House of Dallas, Inc. “This is an unprecedented opportunity to bring a new voice to a familiar platform. To say I am excited and challenged by this opportunity is an understatement.”


“T.D. Jakes” will be owned and distributed by TEGNA Media. Launch markets will include Atlanta, Cleveland, Dallas, Denver, Minneapolis and Seattle, reaching nearly one-quarter of the U.S. television audience. Upwards of 20 TEGNA Media markets will launch the show in the afternoon time period. Additional TEGNA Media stations will air the show as timeslots clear.
Posted by Frank Macek at 3:41 PM