Tuesday Night Football to Air Tonight on NBC, First Since 1946 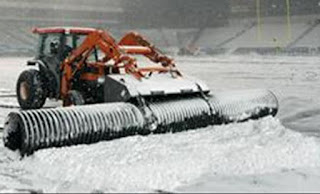 Tuesday is usually a day off for NFL players, but the Philadelphia Eagles host the Minnesota Vikings Tuesday night in a nationally televised game that was switched from Sunday night due to an impending blizzard.

You can catch the game right here on WKYC starting at 8 p.m.

The decision to postpone the game at Lincoln Financial Field was made Sunday amid the threat of a storm that eventually dumped about a foot of snow in the Philadelphia area. The storm was accompanied by high winds.

"The discussions with the league were all about public safety. That was paramount," says Don Smolenski, Eagles chief operating officer. "That, I think, in the end really was what drove the decision."

This is the first NFL game played on a Tuesday since 1946.
Posted by Frank Macek at 4:04 PM No comments: Links to this post

COLUMBUS, Ohio - The Ohio Supreme Court has rejected a challenge to a state sales tax that applies to satellite TV but not cable.

The Ohio Department of Taxation says Monday's ruling is not surprising because similar tax discrepancies have been upheld in other states.

Ohio's highest court ruled 5-2 against satellite companies that complained the tax is unfair. The court affirmed a lower court's decision that the tax does not amount to unconstitutional discrimination because it's based on the different nature of the companies' business activities.

Attorneys for the satellite industry indicated earlier that an appeal was likely.
Posted by Frank Macek at 3:06 PM No comments: Links to this post

Channel 3’s morning news will move to a 4:30am start on January 3rd, it was announced today.

“People lead busier lives, and viewing patterns have changed,” said WKYC News Director Rita Andolsen. “There is now a significant news audience beginning as early as 4:30 in the morning, and we want to serve their needs with the market’s best news, weather and sports coverage.”

“The timing is right,” added Brooke Spectorsky, President and General Manager. “Given how actively this winter has begun, our viewers need weather, traffic and school closings even earlier.”

Email ThisBlogThis!Share to TwitterShare to FacebookShare to Pinterest
Labels: wkyc adds 4:30 am newscast

Time for another behind the scenes look at what's happening at the WKYC Digital Broadcast Center.

We are fast approaching the end of another year - a much better year than 2009 was for many reasons. We are so happy the economy has finally started to move in the right direction, albiet very slowly.

Not much new news to report from the homestead, which is about to celebrate it's 10th anniversary already.
Seems like your blogger can remember slogging into our "not yet completed" control room in the middle of winter as we started moving some operations into the new building in December 2000. The first month was spent with the technical crew at 13th and Lakeside and the talent back in the old E. 6th street studio. Our first show with talent broadcasting here was in January 2001 on Super Bowl Sunday when Scott Newell and Kristin Anderson anchored. I'll share more memories in an upcoming article.

As part of our 10th anniversary, the station received a number of upgrades this year as I have talked about. The last of our construction is currently being completed as we knocked down several walls and created more open space that will be become home to some of our web operations and editing stations. This should be finished up in a week or two. The painters and the other workers have been working hard to get this project wrapped up so we can begin doing more liveshots in our newsroom.

November sweeps are over and WKYC faired well again in the latest period. Channel 3 News at 6 & 7 pm were number one in the important Adult 25-54 demographic and second at 5 am, 6 am and 11 pm. NBC continues to have a rather weak lead-in to our 11 pm show which has hurt the station to some degree. We are hopeful the NBC/Comcast merger changes NBC's direction for 2011.

Our Facebook Faccebook continues between Romona Robinson and Mark Nolan. We are trying to reach between 25,000 and 30,000 friends on Facebook. If we do, Romona has agreed to get greasy and work Mark's Franken Truck, while Mark will head with Romona for a maniped. What we won't do for Facebook Friends.

As always, please don't forget to become a friend of Channel 3 News and Channel 3 Weather. We have special on-line content just for our Facebook friends including your chance to be our "Facebook Friend of the Day," daily behind the scenes promos, sneak peeks at NBC shows, a daily programming guide of what's on Channel 3 and much more.

Posted by Frank Macek at 9:29 PM No comments: Links to this post

Email ThisBlogThis!Share to TwitterShare to FacebookShare to Pinterest
Labels: notes from the newsroom foor 12/7/10

WKYC Promo: We Keep You Connected

Check out our latest November sweeps proof of performance promo:

Posted by Frank Macek at 5:22 PM No comments: Links to this post

Light Up the Season: Send Us Your Pictures & Video

CLEVELAND -- It's that time of year! We want to see your holiday lights and share them with everyone!

We want you to help us light up the season by sending us pictures of your holiday light displays. We'll even pick one each night to be featured on Channel 3 News each night at 11 p.m.

There are several ways you can let us know about your own displays or those around your neighborhood.
Happy Holidays for all of us at WKYC-TV, Channel 3!
Posted by Frank Macek at 4:54 PM No comments: Links to this post