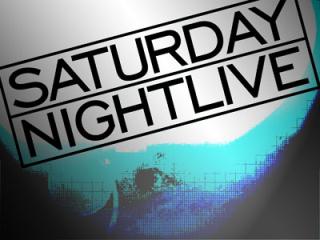 PEPPER PIKE -- A 2000 graduate of Orange High School is the newest cast member on the long-running live comedy show.

Vanessa Bayer, 28, is one of three new featured players to join the cast of the long-running comedy sketch show when it debuts on NBC Sept, 25.

Bayer, a Moreland Hills native, graduated in 2000 from Orange High School. In her four years at Orange, Bayer was elected to homecoming court, ran cross country, and was voted by her peers 'Most Likely to Succeed.'

Those who knew Bayer say no one would have guessed she'd choose stand-up comedy as a career.

"Everyone was really surprised!" said Gail Price, a history teacher at OHS.

Yet even a decade later, her teachers and coaches recall Bayer's smart sense of humor.

"The one thing she had a talent for, she could imitate people. We would ask her to imitate other teachers and, oh my gosh, was it funny. She could imitate anyone," said Bayer's assistant cross country coach Eric Oberster.

Bayer was also an honor student, who no one doubted would one day be successful.

"A wonderful person who knew what she wanted to do," said coach Jon Keller.

A 2004 graduate of the University of Pennsylvania, Bayer moved to Chicago where she dove into stand-up and improv comedy.

She was a member of the iO Chicago theater outlet, that counts Tina Fey, Mike Meyers, Chris Farley, Amy Poehler and other SNL veterans as alumni.

The show's producers say Bayer isn't able to do interviews until after the premiere.

Vanessa's mother, Carolyn Bayer, told Channel 3 she and her husband are beyond excited and proud. They can't say the extent to which Vanessa will appear in the premiere, but said their daughter has been rehearsing this week with the rest of the cast.

"I think it's fantastic that in a decade she has gone from a high school class room to Saturday Night Live. I'm going to be taking a nap so I can stay up that late to watch her!" said English teacher Nancy Brunswick.

Posted by Frank Macek at 12:58 AM No comments: Links to this post

Just a quick note to say we are still here at the WKYC Digital Broadcast Center. The station is in the middle of one of the biggest upgrades since we moved into the building back in January 2001.

Most of my attention has been focused on training with the new systems and getting up to speed on our new control room equipment that will make our video look much better in the near future.

We'll return to our regular blogging in early October after our transition is complete, at which time, I will be sharing the cool new toys we have.

As always, thanks for being a loyal "Director's Cut" reader. Hope you are finding NBC's new fall prime-time schedule a little better this year.
Posted by Frank Macek at 6:15 PM No comments: Links to this post 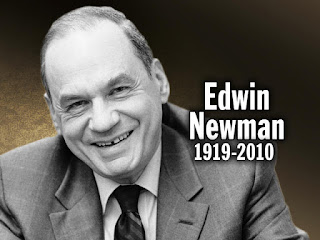 His lawyer says Newman died of pneumonia Aug. 13 in Oxford, England. He'd moved there with his wife in 2007 to live closer to their daughter. The family delayed announcing Newman's death so they could spend some time privately grieving.

While at NBC from 1952 until 1984, Newman did political reporting, foreign reporting and anchoring. With his rumpled, squinting delivery, Newman impressed his audience not so much with how he looked as with the likelihood that what he'd say would be worth hearing.

He turned to writing books in the 1970s, writing a pair of best-sellers on the use and misuse of the English language.

Former NBC News anchor Tom Brokaw described Newman as "always a gentleman and a reassuring presence in our midst."

Current NBC anchor Brian Williams says: "To those of us watching at home, he made us feel like we had a very smart, classy friend in the broadcast news business."
---
Source: The Associated Press

Visit msnbc.com for breaking news, world news, and news about the economy

Posted by Frank Macek at 7:47 PM No comments: Links to this post 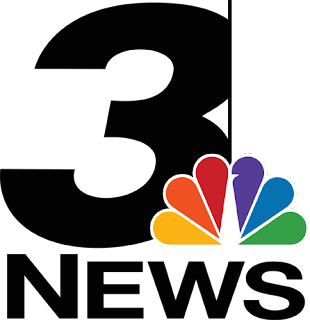 Congratulations to several of our WKYC colleagues who are being recognized for their outstanding work here at the WKYC Digital Broadcast Center.

Channel 3 News Reporter Dave Summers has been named the Society of Professional Journalist (SPJ) "Best Reporter in Ohio" for 2010. The honor is based on a compilation of Dave's work called “A Year of Change." This is the 14th year the SPJ has announced their annual awards which include Ohio's print, broadcast, online, trade and college journalism programs.

Also, Cleveland Magazine has tallied the results of their annual "Best of Cleveland" magazine reader's poll and Channel 3 once again sweeps up in several categories.

The winners will be honored at the 5th Annual "Best of Cleveland" awards ceremony on Friday, October 15th at the Rock and Roll Hall of Fame and Museum. See all the results in this month's edition of Cleveland Magazine.
Posted by Frank Macek at 7:18 PM No comments: Links to this post

Channel 3 will once again connect to the community with our annual participation in the Susan G. Komen "Race for the Cure."

WKYC-TV will have a special half-hour edition of Channel 3 News at 7 on Friday to bring you all the information you need to know.

And don't forget, this Saturday's Cleveland "Race for the Cure" is at a new location. It will begin and end at the Cleveland State campus's Wolstein Center.

Saturday's schedule:
Here are the links to the new race course, parking garages in the area, some free parking areas/garages, and a map of the inside of the Wolstein Center for exhibitors, booths and refreshments.

Posted by Frank Macek at 6:21 PM No comments: Links to this post

Email ThisBlogThis!Share to TwitterShare to FacebookShare to Pinterest
Labels: race for the cure coverage on wkyc

Time for another behind the scenes look at what's happening at the WKYC Digital Broadcast Center.

We find it hard to believe fall is just around the corner, Browns preseason is already over and a disappointing Indians season is rapidly coming to a close.

But, we have plenty of exciting news to share with you this month regarding some changes, improvements and upgrades being made both on-air and behind the scenes at WKYC.

Before we get to that, congratulations to my WKYC colleagues Director Allen Wohl and Sports Producer Jeff Yakawiak for some great preseaon Browns coverage on Chanel 3. The station did local production on all four of the preseason games which took our staff and crew months to plan and coordinate. All that effort paid off with network quality games you have come to expect from Channel 3. Also, it was nice to have Jim Donovan and Bernie Kosar back in the broadcast booth again this year providing unique and colorful insight into the "new" Browns team for 2010.

Don't forget, our regular Browns season coverage kicks off this weekend with the following programming:
You may have noticed a new face on Channel 3's local morning production, "Good Company Today." Joe Cronauer has joined the broadcast. Many of you know him from the successful "Brian and Joe Radio Show" that aired in the mornings on WMVX/106.5 before the pair was jettisoned in budget cuts. Joe's new role with the show will be to hit the streets and take us to the sites and sounds of Northeast Ohio. If it's fun, if it's entertaining, if we can learn something - Joe will be there! Joe steps into the limelight as Fred Griffith scales back his on-air work to 2-3 days a week. As WKYC Program Director Terry Moir tells the Director's Cut Blog, "At nearly 82, we figure Fred could give Regis Philbin a run for his money on the most hours any one individual has spent on TV!" Joe joins co-hosts Andrea Vecchio and Michael Cardamone on the program effective immediately. Also, construction is underway on a brand new set and graphics look that will debut next week on the program that airs weekday mornings from 10 to 11 a.m. on Channel 3.

A couple of sad notes to pass along. First, our best wishes to "Uncle Bill" Weisinger, a well known Cleveland radio engineer who is very ill. We had the honor of working with Bill at the old WRMR/AM 850 when he worked there as an engineer and have seen him a few times since around the WKYC Digital Broadcast Center during meetings of local engineering chapters. Ohio Media Watch first alerted us to the seriousness of Bill's condition and his work at stations WSTB/88.3 and one of favorite stations, WKHR/91.5 in Bainbridge that plays the Great American Standards. Our best wishes to Bill and his family.

And a former booth announcer from WKYC's historical past has died. Joe Howard worked here under NBC ownership as staff pianist and arranger for WTAM radio and WNBK-TV. The Plain Dealer also reported that Joe was musical director of WEWS-TV, leading a trio on "The One O'Clock Club." Joe was 82 years old.

And finally, September is a really BIG month for the staff of Channel 3. Even bigger than the transition to HD broadcasting, WKYC will launch a brand new newsroom system, editing platform and video playback system that is currently being installed. This new system will greatly improve out ability to bring you the best content both on-air and on-line and the new and exciting platforms that develop. This is a station wide project that is the first major newsroom upgrade since the station moved into our "new" building at 13th and Lakeside in January 2001. We'll have much more on the process once it is completed on the blog.

As always, please don't forget to become a friend of Channel 3 News and Channel 3 Weather. We have special on-line content just for our Facebook friends including your chance to be our "Facebook Friend of the Day," daily behind the scenes promos, sneak peeks at NBC shows, a daily programming guide of what's on Channel 3 and much more.

Posted by Frank Macek at 5:52 PM 2 comments: Links to this post

Email ThisBlogThis!Share to TwitterShare to FacebookShare to Pinterest
Labels: notes from the newsroom for 9/8/10
Newer Posts Older Posts Home
Subscribe to: Posts (Atom)