Jimmy Fallon Stopped by WKYC-TV For A Visit On Friday A familiar face from NBC stopped by the Channel 3 studios today.

He spoke about his upcoming appearance on Saturday Night Live and how he feels about taking over the iconic Tonight Show early next year.

Click to watch his interview the Russ Mitchell and Kris Pickel:

The award is given annually by the Radio Television Digital News Foundation to a leader who has made significant contributions to the protection of the First Amendment and freedom of the press. The award will be presented on Wednesday, March 12 in Washington, DC.

“From his experience leading a newsroom to his current role overseeing Gannett’s broadcast division, Dave has always been a strong leader and advocate for free speech. This award has been given to some of the most influential journalists of our time and shines a spotlight on the rights we hold dear. Dave, through his leadership, sets a terrific example for our broadcast journalists as they fight to protect First Amendment rights. I congratulate Dave on this important and well-deserved honor,” said Gracia Martore, Gannett president and chief executive officer.

\ Lougee has been president of Gannett Broadcasting since 2007 and currently oversees 23 television stations across the country. Once Gannett’s previously announced acquisition of Belo closes, Gannett’s broadcast portfolio will nearly double, including stations to be serviced by Gannett through shared services or similar sharing arrangements. Lougee started his broadcast career in Denver in 1981, ultimately serving as vice president/news director at Gannett’s KUSA-TV in Denver from 1990-1996.

Lougee serves on several industry boards. He is currently Vice Chair of the NBC Affiliates Board, and a member of the National Association of Broadcasters (NAB) Board of Directors. He is also a member of the BMI (Broadcast Music Inc.) Board of Directors and immediate past Chair of the Television Bureau of Advertising (TVB) Board of Directors. Among past First Amendment Leadership Award winners: USA TODAY founder Al Neuharth, ABC’s Roone Arledge, CNN Founder Ted Turner, CBS “60 Minutes” creator Don Hewitt, Washington Post Publisher Katharine Graham and Fox News’ Roger Ailes.
Posted by Frank Macek at 3:27 PM


Starting this Saturday morning on Channel 3 News Today, a new feature titled "7 Minutes with Russ Mitchell" will make its debut. The purpose of "7 Minutes with Russ Mitchell" is to have Channel 3 News' main anchor and managing editor, Russ Mitchell, interview a news maker. Someone we think you'll find interesting, have a great conversation and give you something to think about the rest of the day.

According to Mitchell, "These people are fascinating and we could spend hours talking to them, but they're busy and viewers are busy. So we came up with 7 minutes. I have seven minutes to talk to these folks and that is the trick. Condensing complicated or enlightening or entertaining subjects and people down into a seven minute interview."

The inaugural interview is with Dr. Toby Cosgrove, President and CEO of the Cleveland Clinic. Be sure to tune in this Saturday at 9am as Russ and Dr. Cosgrove talk about the state of healthcare and beyond, from a professional personal point of view as well
Posted by Frank Macek at 6:50 PM 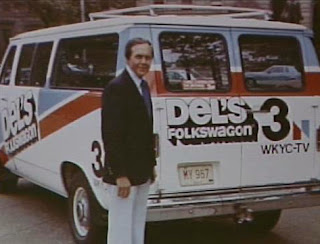 He's been a mainstay in local Cleveland television for years. Now, our beloved Del Donahoo is about to turn 90 years young in just a few days.

Although he's long retired from Channel 3, we are still going to help him celebrate this milestone with your birthday cards and greetings.

Please mail your birthday cards to:

We'll deliver the cards we receive here at Channel 3 on his birthday. But, quiet - that part is a secret.
Posted by Frank Macek at 9:48 PM

WKYC-TV announced today it will re-air the exclusive Dr. Phil interview with Michelle Knight this Saturday Night from 7 to 9 p.m. on Channel 3.

The highly talked about and extremely emotional show is a two part special that aired this week on Tuesday and Wednesday on WKYC.

The special is an exclusive one on one interview between Dr. Phil McGraw and "Miracle in Cleveland" survivor Michelle Knight about the 11 years of hell she endured at the hands of Cleveland kidnapper Ariel Castro and how she survived along with other survivors Amanda Berry and Gina DeJesus.

Join us this Saturday night from 7 to 9 p.m., an exclusive interview, you'll only see in Northeast Ohio on WKYC-TV.