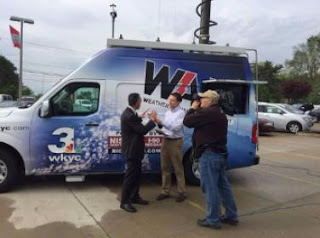 Meet the W.A.M, Channel 3's Weather Advance Mobile unit. The W.A.M. is our brand new weather vehicle that is designed not only to cover breaking weather, but also educate people on how weather and technology go together.

Complete with a weather station and the ability to broadcast live from just about anywhere in Northeast Ohio, the W.A.M. is like having a studio weather center, anywhere we want or need it to be. And that includes schools or public events.

If you'd like to have the W.A.M appear at your school or community event, please click the following link for MOBILE USERS CLICK HERE to request the W.A.M.

NOTE: Due to the volume of submissions, we will not be able to accommodate every request. Scheduling is subject to availability. Channel 3 reserves the right to cancel any event due to breaking news, breaking weather, technology or vehicle issues, or other unforeseeable events.

As you have probably already heard, WKYC 6 & 11 PM anchor Kris Pickel is heading off to Phoenix, Arizona, as main anchor at KPHO-TV at the end of May. Pickel joined WKYC three years ago on the anchor desk with Russ Mitchell and has felt right at home in Northeast Ohio. However, she tells the Director's Cut Blog, she will greatly miss Cleveland, but wanted to be closer to her family living in California and Phoenix is a much shorter jet hop. No word yet on who will replace Kris on the anchor desk, but expect an announcement soon. 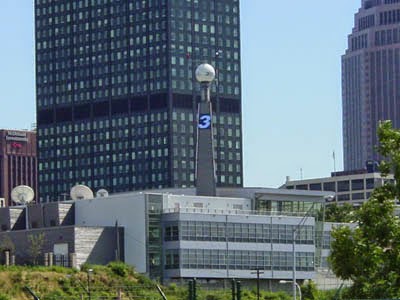 WKYC welcomes Phil Trexler to Channel 3 News at Executive Producer of Investigations where he will work very closely with The Investigator, Tom Meyer, to producer high profile investigative stories for the station. Most recently, Phil worked at the Akron Beacon Journal where he has been an award-winning reporter for many years. Look for Phil's own stories on wkyc.com and our other on-line platforms starting this month.

On the digital side, Emily Crilley is also joining the Channel 3 team as a Digital Content Producer. Crilley is a recent graduate of Kent State’s Journalism program next weekend and has spent time time in the Rubber City Radio newsroom and WDRB-TV in Louisville as a broadcast intern. She was also a part of TV2 newsroom at Kent where she is a reporter who can shoot, write, edit, and produce digital content.

Behind the scenes, times have been very busy in the production department airing several local specials recently including the two hour Tribe Time Opening Day Special on April 10th, The Rock Hall Induction Preview on April 17th, Cavs Playoff Special onApril 18th and the Countdown to the Draft Special on April 30th. It's how we "See the Possible" for a city on the rise. We are looking forward to seeing how far the Cavs go in the playoffs this year and are hoping for that NBA Championship we've longed for.
Posted by Frank Macek at 4:46 PM