Check out the newest WKYC promo that shares the experience of veteran journalists Russ Mitchell and Kris Pickel, weeknights on Channel 3 News at 6 & 11 PM.

Posted by Frank Macek at 9:35 PM No comments:

Emmy nominations were announced on Thursday by the NATAS Lower Great Lakes Chapter. WKYC/Channel 3 received a total of 12 nomations, including 6 by Channel 3 Investigator Tom Meyer.

You can read the complete list of nominees at: http://www.nataslgl.org/awards_emmy_nominees_2012.php

Channel 3's Nominations for calendar year 2011:
Congratulations to all my colleagues on their strong journalistic work!
Posted by Frank Macek at 6:16 PM No comments:

The all important May sweeps will kick of tomorrow, April 26th, for the next four weeks. We will be bringing you a month filled with special reports and stories you won't see anywhere else from Channel 3's most experienced news team.

Many of you have noticed that the latest addition to our WKYC anchor team has hit the airwaves. Lynna Lai made her debut last Saturday night at 6 & 11 PM where she will be co-anchoring with Eric Mansfield until he leaves for his new position at Kent State University at the end of May. You'll also see Lynna reporting for Channel 3 News at 6, 7 & 11 pm during the week.

Tune in for Channel 3 Sports "Browns Draft: 2012" special Thursday, April 26th, from 7 until 8 p.m. hosted by WKYC Sports anchor and radio voice of the Browns, Jim Donovan. Jim will be joined by Dave Chudowsky, Doug Dieken, Bernie Kosar and other special guests as we prepare for the all important draft at Radio City Music Hall in New York City starting at 8 p.m.

Channel 3 has once again teamed up with the Cleveland Regional Transit Authority (RTA) and Charter One to help feed those in need throughout Northeast Ohio. RTA's second annual 'Fill the Bus' initiative will take place this Friday, April 27, from 5 am to 1 pm, at the WKYC Digital Broadcast Center at 13th and Lakeside in downtown Cleveland. The RTA's Community Bus will be in our front parking lot, allowing you to drive up and donate the SUPER SIX items: beef stew, canned soup, canned vegetables, cereal, peanut butter and tuna fish, along with other foods and cash.

Congratulations to WKYC "News @7" anchor Robin Swoboda, who was Robin was honored for her excellence in television at the Cleveland Association of Broadcasters annual luncheon held today, Wednesday, April 25th, at Windows on the River. Robin has been on the Cleveland airwaves since 1986 and at Channel 3 since February 2011. She has brought both news, laughs and memories making Cleveland a better city. WNCX/98.5 personality Michael Stanley and Rubber City Radio Group's Mark Biviano were also honored at the event.

Posted by Frank Macek at 5:36 PM No comments:

Email ThisBlogThis!Share to TwitterShare to FacebookShare to Pinterest
Labels: notes from the newsroom for 4/25/12

“For 12 years, I’ve helped present the daily struggles and challenges of Northeast Ohio. Now I have a chance to take all I’ve learned and create projects and partnerships that can make things better for our communities. While local television has always had the power to shine a light on the issues, we now have multiple platforms to create support and exposure for worthy endeavors. We can be a catalyst for real change,” said Ms. Andolsen “and I can’t wait to get started”.

“WKYC’s vision, and that of all of Gannett’s 23 television stations, is to serve the greater good in our communities,” stated President and General Manager Brooke Spectorsky. “With Rita’s outstanding stature in the greater Cleveland communities, I can think of no better leader to take on this vital role for Channel 3.

Ms. Andolsen will be responsible for designing and implementing advocacy projects and launching new community partnerships. She will take a lead position on major station campaigns, working closely with WKYC local programming, news, sales, the networks of NBC and the resources of Gannett including USA Today.

Rita’s awards include the regional Edward R. Murrow for Journalism, as well as multiple Emmys. She serves on the boards of: College Now, The Gathering Place, The Karen P. Nakon Breast Cancer Foundation, and The Prayers from Maria Foundation.

She begins her new position in early summer. The station will begin a search for her replacement shortly.

Congratulations to WKYC's Tom Meyer, "The Investigator" for being honored with a regional Edward R. Murrow Award for "Best Video News Series" and his shocking report "Hidden Hazards."

The northeast Ohio media market is included in Region 7 along with the rest of Ohio, Illinois, Indiana and Michigan.Ohio.

You can watch Tom's winning entry at: http://youtu.be/7uKozIzb0WU

The National Awards will be announced later this year.
Posted by Frank Macek at 3:48 PM No comments: Links to this post

Cleveland will be in the spotlight this weekend as the 2012 Rock and Roll Hall of Fame Induction Ceremony returns to the best location in the nation this week.

WKYC will present a special Rock Hall special this Friday at 7 p.m. called "Ten Days That Changed The World."

WKYC 6 & 11 PM co-anchors Russ Mitchell and Kris Pickel, 7 pm anchor Robin Swoboda and reporter Monica Robin will bring you a look at the all the glitz and glamour from the Rock Hall including an indepth report on all this year's inductees, how the week's events help boost the Cleveland economy, a behind the scenes look at the recent Rock Hall renovations, and see who's in town for Saturday's big show. 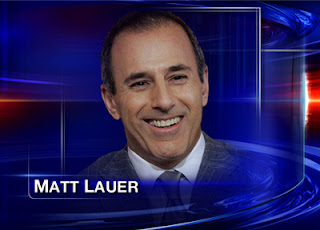 Lauer planned to announce Friday on the air that he has signed a long-term contract to remain as co-host of the No. 1 morning show, NBC News spokeswoman Megan Kopf said Thursday.

Although "Today" is on a historic winning streak in the ratings, ABC competitor "Good Morning America" has been gaining ground.

Lauer's decision provides important stability for "Today" and puts to rest speculation that he might reunite with his former co-host, Katie Couric, on the syndicated show she's launching this fall.

Lauer said last May that he had discussed joining with Couric on a new venture. But he predicted then that he would be staying at "Today" for "a long time."

He's been a fixture with the show since 1994, and "Today" has remained No. 1 in the weekly ratings since 1995. He's created a popular "Today" catchphrase with his globe-hopping "Where in the world is Matt Lauer?" segments.

For broadcast networks, morning represents one of the most important parts of the day. The shows are hugely profitable at a time of declining TV viewership, and none has been more of a cash cow than "Today."

The morning scene drew increased attention this week as the NBC and ABC programs featured dueling celebrity co-host: "Today" had Sarah Palin for a day, while Couric is spending the week as substitute anchor at "GMA."

Palin, the former Alaska governor, helped "Today" maintain its winning streak against "GMA" on Tuesday, but Wednesday proved a cautionary tale for NBC.

With Couric on board, "Good Morning America" was able to claim a one-day victory in viewership over "Today."

ABC's advantage was the latest twist in a morning-show battle that has seen "GMA" chipping away at the ratings lead that "Today" has maintained every week for 16 years.

Overall last week, "GMA" shrank its gap behind "Today" to 119,000 viewers from 137,000 the previous week. There had been some reports that "American Idol" host Ryan Seacrest could replace Lauer, and the two bantered about it Wednesday when Seacrest visited "Today" to announce he would take part in NBC's coverage of the Summer Olympics.

"What kind of conversations have you had with NBC officials about joining the `Today' show?" Lauer asked Seacrest during a lighthearted exchange.

"Oh," said Seacrest, grinning, as off-camera laughter was heard from the crew. "They didn't tell you?"
Posted by Frank Macek at 10:04 PM No comments: Links to this post

Our ace WKYC photographer Ryan Haidet was in the studio to capture her first broadcast.

Click on the photo to see our slide show on wkyc.com: 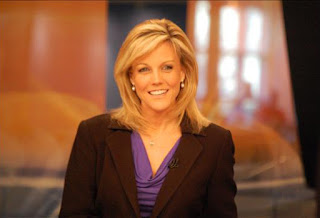 Posted by Frank Macek at 5:57 PM No comments: Links to this post

Here she is, Channel 3 News' newest anchor, Kris Pickel. Our Russ Mitchell has a quick question and answer with her as a brief introduction for Cleveland viewers.

Posted by Frank Macek at 5:34 PM No comments: Links to this post