Check out one of our newests promos featuring the accomplishments of WKYC Chief Meteorologist Betsy Kling.

Posted by Frank Macek at 5:29 PM No comments:

WKYC's Anchor Kris Pickel went "Over the Edge" on Monday. But it was for a good cause!

"Over the Edge" provides individuals the opportunity to rappel down the side of a huge building.

There's still a few Tuesday slots open to "Go Over the Edge of the DoubleTree by Hilton Cleveland Downtown - Lakeside."

Some companies even collect employee donations to "Toss the Boss" over the side, "forcing" him or her to take the jump. All participants that take part in this adventurous event raise money for Special Olympics Ohio.

Each participant will get the opportunity to Go Over the Edge of the DoubleTree by Hilton Cleveland Downtown - Lakeside.

A training will be held prior to each participant's rappel. Special Olympics Ohio will have Over the Edge trained professionals guide each person through his or her rappel experience.

The event will run all day on Tuesday, May 22, and participants may choose their rappel time on a first-come basis.

See the story on Channel 3 News at 11 PM tonight!
Posted by Frank Macek at 7:57 PM No comments:

Email ThisBlogThis!Share to TwitterShare to FacebookShare to Pinterest
Labels: kris pickel, over the edge, wkyc

The moderator of NBC's "Meet the Press" was in town on Monday to moderate the City Club's "Swing State, Building Our Momentum" at the Renaissance Cleveland Hotel on Public Square. The event began at noon and was widely attended by Cleveland's business leaders and political movers.

Afterwards, David stopped by the WKYC Digital Broadcast Center for a visit, to shoot some promos with Senior Political Correspondent Tom Beres and to sit down with WKYC 6 & 11 PM anchor Russ Mitchell for a one on one interview about educating the campaigns on Cleveland's strengths.

David has hosted "Meet The Press" since December 14, 2008, after being formally introduced as full-time moderator. David took over from Tom Brokaw, the interim host, following the death of Cleveland favorite Tim Russert.

Here are some pictures of his visit on Monday courtesy of WKYC's Mac Mahafee: 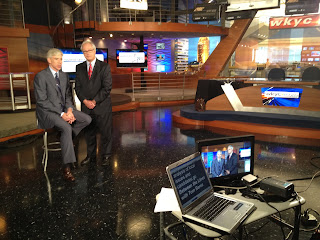 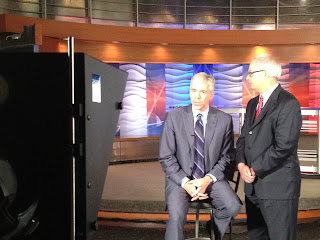 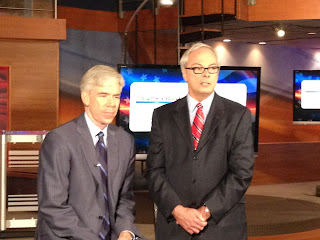 Click on the video to watch Russ Mitchell's interview with David on Monday:

Posted by Frank Macek at 5:07 PM No comments:

We'll keep this edition brief, but wanted to take a moment and note our return from a very "brief" and indefinite hiatus. Your blogger received so many notes from those on Facebook and our regular readers that I decided to reconsider the move to end the blog.

If nothing else, I wanted to show that I was truthful about saying no one at WKYC "forced" me to end the blog. It was my decision then and my decision to start the blog back up today. WKYC management has been very supportive of my efforts in the past and I fully expect that to continue.

Sweeps end next Wednesday, May 23rd, and we'll all be glad when that moment comes. May and November sweeps months seem like the longest months of the year for some reason. This May is very competitive in the Cleveland market and the final results will be interesting.

The WKYC staff is busy working on a lot of projects coming up this summer including the 2012 Summer Olympics on NBC from London. The games are just 70 days away now and we'll be in the Olympic Zone!

Also, Browns preseason football is returning to Channel 3 where we will broadcast 3 of the 4 games this year. The first game air on WOIO due to conflicts with the Olympics which we are obligated to air. Here is our broadcast schedule:
That's it for now. Thank you for your support as the Director's Cut Blog has become a powerful voice in the media community. We are very proud of that.

Email ThisBlogThis!Share to TwitterShare to FacebookShare to Pinterest
Labels: director's cut blog, notes from the newsroom for 5/18/12

Sara Shookman will be joining Channel 3 News as a Multimedia Journalist from WVLT/Knoxville where she currently handles similar duties for the CBS and MyVLT stations.

Her other studies took her to Universita degli Studi di Torino in Turin, Italy, where she studied International Business.

Her first job was reporting and anchoring for WOUB in Athens, Ohio, where she spent three years telling stories about Appalachian life and learning her way around a camera.

From there, she joined WVLT.

She'll start her new duties at Channel 3 in June.
Posted by Frank Macek at 3:48 PM No comments:

The WKYC News app for Android users has finally arrived!

Now available in the Android Marketplace, the news app has all the features as our news app for iPhone users including the following:
Channel 3 is determined to provide the best content possible in a way that serves the interests and the needs of our viewers and users.

To download it, go the Android Marketplace and search for "WKYC-TV" or click on the following link:

We also have the WKYC Interactive Radar App available for free as well on Androids at:

https://play.google.com/store/apps/details?id=com.wkyc.android.weather
Posted by Frank Macek at 7:48 PM No comments:

WKYC's Bruce Kalinowski has a reason to celebrate this week as it was 30 years ago that he and WJW Meteorologist Andre Bernier kicked off a brand new cable channel called "The Weather Channel" out of its new studios in Atlanta, Georgia.

Under the on-air name Bruce Edwards, the channel began broadcasting on May 2, 1982, airing weather forecasts and weather-related news, 24 hours a day.

"We Take The Weather Seriously, But Not Ourselves" was the on-air slogan used from the launch in 1982 to 1984 before moving on with other witty weather branding over the years.

On January 3, 2008, it was reported that The Weather Channel and its assets were put up for sale by its original owner, Landmark Communications. On July 6, 2008, NBC Universal, Bain Capital and Blackstone Group agreed to purchase the Weather Channel from Landmark and was finalized on September 12, 2008.

A 30 year reunion was held last Saturday night with many of the original members of The Weather Channel in Atlanta although Bruce had to work and wasn't able to attend.

After leaving "The Weather Channel," Bruce returned to his hometown of Cleveland as Chief Meteorologist at WOIO-TV/19 & WUAB-TV/43 and eventually joined WKYC for Noon and Weekend morning duties. Recently, Bruce took over the weekend 6 & 11 PM weather position. Every show, you'll see Bruce with one of his favorite mugs that promotes our local teams and the city of Cleveland.

Bruce still says it proudly that Cleveland IS "The best location in the nation!" - even with the snow and cold temperatures during the winter.

Here is that first broadcast, courtesy of Andre Bernier back on May 2nd, 1982. 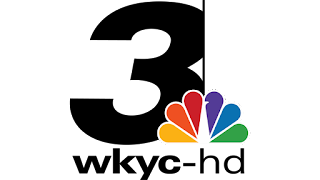 For the first time in this new digital age, Channel 3 broadcast its first news shows with all digital, all high definition remotes on Thursday, May 3rd at 6 & 7 pm, as the station sent all our main on-air talent to different locations to break in the new system.

And it worked perfectly thanks to the hard work and dedication of our engineering team at Channel 3 led by Director of Technology Jim Miller.

Except for some standard definition signals coming into the station from satellite and other lower quality sources, you will now see all our live shots in true high definition. The station has been shooting video with high definition cameras in the field since last year. However, this is the first time that the station could transmit live pictures in high definition from our remote trucks.

At 6 & 7 pm, WKYC anchor Russ Mitchell broadcast from the 3rd floor deck at Channel 3, along with sports anchor Jim Donovan as they overlooked a beautiful background of the Rock and Roll Hall of Fame and Museum and Cleveland Browns stadium on the hottest day of the year so far in Cleveland.

Co-anchors Kris Pickel and Robin Swoboda broadcast live from Mitchell's Ice Cream Shop in Rocky River as WKYC Chief Metorologist Betsy Kling did weather with a live all digital remote signal from the front of the station using the chromakey wall outside, Dick Russ broadcast live from a moving boat inside the breakwall of Cleveland Harbor while traveling at 30 knots, and Brandon Simmons was on Mobile 3 cruising the city and giving away from ice cream while broadcasting live using a Live Vu broadband backpack.

It's another step in the ever changing world of digital broadcasting that Channel 3 continues to lead the way in in Cleveland and northeast Ohio.

Click on the video below to see the first block on the 6 pm show on Thursday:

Posted by Frank Macek at 8:08 PM No comments:

Nielsen has announced their 2013 survey dates for both LPM (Local People Meter) and non LPM markets for the Cleveland/Akron/Canton DMA.