WKYC's Russ Mitchell has been named 2013's winner of the Robert G. McGruder Award for Diversity by the School of Journalism and Mass Communication at Kent State University.

The award recognizes the accomplishments of media professionals who encourage diversity in the field of journalism. Mitchell, who serves as managing editor for WKYC's evening news and lead anchor during the 6 p.m. and 11 p.m. newscasts, will be honored at an awards luncheon and lecture on Tuesday, April 2.

The luncheon is by invitation only.

This year marks 10 years of honoring diversity excellence with the Robert G. McGruder Award for Diversity, and the lecture and luncheon has become one of Kent State's most successful diversity events.

Also being recognized at the luncheon is the Akron Beacon Journal's Betty Lin-Fisher as winner of 2013's Diversity in Media Distinguished Leadership Award. Later that day, Mitchell will serve as keynote speaker at the McGruder Lecture inside the Kent Student Center Kiva at 2:15 p.m.

This is free and open to the public. 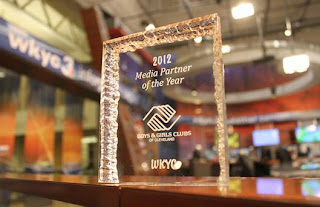 A wonderful honor for us today at Channel 3.

The Boys & Girls Clubs of Cleveland recognized our station as "Media Partner of the Year" at their annual awards breakfast.

Several months ago Channel 3 committed to raising $50,000 in community funds to open the clubs on Saturdays for the next year.

Other partners in this project include Key Bank, Oswald Companies, Liberty Ford and the Gannett Foundation.
Posted by Frank Macek at 4:03 PM No comments:

Email ThisBlogThis!Share to TwitterShare to FacebookShare to Pinterest
Labels: boys and girls clubs of cleveland, wkyc

WKYC will once again air several Indians games on Channel 3 for the 2013 Major League Baseball season, although not as many as in past years due to SportsTime Ohio's recent purchase by Fox Sports.

Here is a list of the games and times to watch the games on Channel 3 starting with the Indians Home Opener in April:

As was released on February 8th by the Cleveland Indians, SportsTime Ohio will carry 159 Tribe Games for the 113th season as a member of the American League.

Visit indians.com for the complete schedule.
Posted by Frank Macek at 8:51 PM No comments:

Email ThisBlogThis!Share to TwitterShare to FacebookShare to Pinterest
Labels: indians games on wkyc 2013

Comcast Doubles Down On TV in $16.7B Deal For NBCU 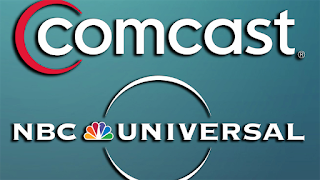 Comcast's $16.7 billion deal to buy the remaining half of NBCUniversal ahead of schedule represents a resounding vote of confidence in the future of TV, even as Internet video reshapes the entertainment landscape.

The decision was driven largely by Comcast Corp.'s belief that it would end up paying substantially more for General Electric Co.'s remaining 49 percent stake if it had waited until 2018, as had been envisioned in 2011 when Comcast acquired majority control of NBCUniversal.

The flagship NBC network, once seen as the deal's albatross, has been on the turnaround. As the advertising market has rebounded with the economy, so have the fortunes of NBCUniversal and other network owners.

That made the latest transaction, announced Tuesday, seem like a savvy one at a relatively modest price.
Posted by Frank Macek at 5:55 PM No comments:

Another sad day here today at WKYC as we had a wish our good friend Dick Russ a fond farewell this afternoon in the Channel 3 Newsroom...

Best wishes Dick and lots of love from all of us at WKYC!

﻿
﻿Channel 3 News is now available anywhere on the go with our new WKYC iPad App for Apple users.

The "live" tab will become active when Channel 3 News begins.
Plus, the new iPad app features lots of the video you'll find on Channel 3 News and wkyc.com in cased you missed something during the day.

For weather lovers, the new iPad app also features our cool, HD Interactive radar that pinpoints the latest conditions right where you are, your forecast hour by hour, the extended forecast, and the weekend forecast always updated, 24/7.

If you haven't downloaded the new WKYC News App for iPad, you can get it for free now @ http://on.wkyc.com/wkycipad

Posted by Frank Macek at 8:35 PM No comments: