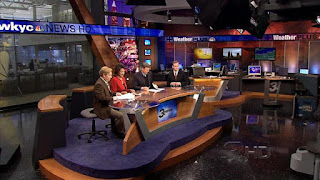 WKYC is celebrating its 15th anniversary at its state of the art digital broadcast center at 13th and Lakeside in downtown Cleveland.

The building which officially opened for business in January 2001 was built just east of downtown Cleveland on the area known as Davenport Bluffs.

Construction kicked off in late 1999 and would take just over a year to finish.

During the end of December 2000, the station's technical operations first moved into the new building including master control and the main control room where all the newscasts were switched prior to the launch of the new studio on the Monday after the Super Bowl that year.

The newscasts themselves continued to originate from the studios at the old building on E. 6th Street through an fiber optic connection to 13th and Lakeside until the end of January 2001.

Since then, the technology has continued to be upgraded as the station transitioned from the standard SD format to high definition broadcasting and highly automated processes including the main control room currently running Sony ELC Live Production Automation.

The future continues to be exciting for WKYC with a big year in 2016 with the Republican National Convention in July, the 2016 Olympics from Rio in August and the eventual transition to ultra high definition formats in the coming years.