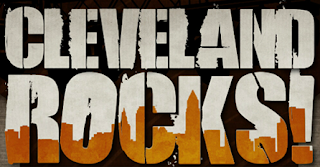 This weekend marks the 15th anniversary of the opening of the Rock and Roll Hall of Fame and Museum in downtown Cleveland. As we mentioned in an earlier posting, WKYC will present a special one hour show this Friday Night, September 3rd, called "Cleveland Rocks" from 7 to 8 p.m.

Your blogger remembers that day when I was just beginning at WKYC as a studio technician before becoming a director and was part of the crewing assigned to be on the remote broadcast. We broadcast all of our news broadcasts that day from a platform just across the street from the Rock Hall.

The station rented one of those familiar large production trucks to cover the event. Your blogger was assigned to do audio for the noon show.

I thought you might enjoy seeing some of the behind the scenes pictures I found in the "Director's Cut Blog" archives from the opening of the Rock and Roll Hall of Fame and Museum. Hard to believe it has been 15 years already.

My colleague, WKYC Production Manager Al Wohl, reminds me that we also did more than our news from there that day. WKYC covered the mid-day parade for over an hour live which started out as our noon news show, but the parade was so cool we stayed on the air for another hour or more.

The the evening of opening night we did a live one hour special from right outside the Rock Hall while the opening concert was going on at the old Cleveland stadium next door.

Al tells the Director's Cut Blog, "It was truely one of the coolest days (and nights) I've ever had at WKYC."

We would certainly agree!