Caught On Tape: Rusty Does the News 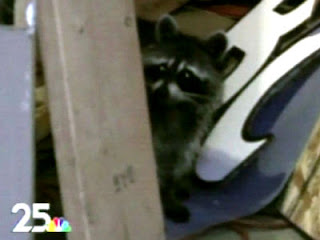 Here's another one of those fun, behind the scenes adventures of television news people in case you haven't seen it.

NBC's Flint, Michigan affiliate WEYI had an unexpected guest drop by the set of their live newscast this morning. The morning show team heard some noise coming from behind the set and quickly found the source was "Rusty" the raccoon.

News anchor Elizabeth McFarland watched on as weatherman Brian Hughes, wearing oven mitts borrowed from a cooking segment, shooed Rusty away. At first the raccoon actually went further into the building, but after about 20 minutes, Rusty finally made it out safely.